Nick Nairn’s Christmas Roast Turkey with all the Trimmings 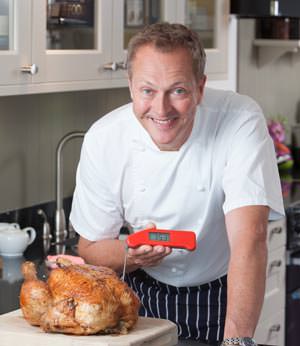 With a frozen turkey, allow plenty of time for it to defrost completely. Always remove the giblets as soon as possible and set aside for stock later. Cook from room temp.

First cut the skin between the leg and the breast then gently open out the legs, this will allow the heat to penetrate them quicker. Cut the orange in half before placing inside the cavity of the bird along with the thyme. Brush the turkey generously with olive oil. Season well with salt and pepper and place in a roasting tray. Cover the bird loosely with tin foil to allow a flow of air to circulate around the turkey. Cook at 200ºC/425ºF/gas 7 for approx 30 minutes then reduce to 160ºC/320ºF/gas 3 and cook for a further 75 minutes before removing the tin foil. Turn the heat back up and cook for approximately a further 15 minutes to get the skin nice and golden brown (keep basting) then cover and leave to rest for 30 mins. Cooking time will depend on the exact weight of the bird. These times are for a 5-6kg turkey. A simple rule is 20 minutes per kilo plus 30 minutes at the end plus 30 minutes resting.

A great tip is to invest in a Thermapen food thermometer and check to ensure that the thickest part of the breast has achieved a core temperature of 75ºC (this temperature will increase by some 10ºC while resting). The legs would normally take longer than the breast, but as they have been slightly separated from the crown they will cook quicker.

While the bird is cooking, peel and chop your potatoes, boil for 10 minutes in salted water then drain well. Shake them in the colander to roughen up the edges and season with pepper. Heat the sunflower oil in a roasting tray in the oven (200°C/400°F/gas 6) and, when hot, tip your potatoes in and stir around. Check them after 20 mins and turn them over. Cook for a further 20 minutes. Remove from the oven and serve immediately.

For the parsnips, peel then remove the top and bottom before cutting lengthways into quarters. Remove the woody stalk then place in a roasting tray. Rub with olive oil, season and place into a hot oven for approx 30 minutes, turning occasionally.

Place the stuffing in a separate tray and cook at 190C for 30 mins until the top is crispy. Don’t put it in the bird – by the time it’s cooked through the bird will be overdone, and it will be grey and squashy.

For the sprouts, remove the root then peel off the outer leaves before making a cross with a small knife on its base. Cook for 5-6 minutes in boiling salted water.

For the gravy, pour off and discard any fat from the roasting tray then pour the turkey juices into a small saucepan. Bring to the boil before adding a few gravy granules to thicken, or use a little cornflour mixed with water if you prefer.